We’ve seen a lot of problems with exams recently – just look at the problems last summer with mistakes in a wide range of exam papers. Today I’ve found that AQA have spent so little time checking that suitable research sources are online that the only good Google results are their own teacher notes, and a primary science investigative cartoon. On top of this, a new specification inevitably means a lack of practice material which means students and teachers don’t really know what to expect.  If you have to explain why this is unfair to non-teachers, perhaps this analogy might help; we wouldn’t expect to have a driving test on the road having only practised in car parks, would we?

I have an idea.

In fact, I have two ideas, neither of which is mine. If we take the ‘backward design’ principle (originated by Wiggins and McTighe, introduced to me by Robin Millar’s work) and combine it with a ‘curated crowdsourced’ model, maybe there’s a way to do a better job.

My apologies to Robin and other experts if I miss the subtleties – I’m just a classroom teacher with delusions of writing grandeur. Instead of beginning a syllabus with the content that we want to teach, backward design asks what we want students to be able to do at the end – how will they be tested? How will we know if the course was successful or not (or more precisely, how successfully the student has completed it)? If we create assessment tasks that will allow us to differentiate between students – ideally including, but not limited to written exams – then we can develop a list of what students should learn, which gives us a list of possible learning/teaching activities. As Robin and others point out, ‘teaching to the test’ is only a problem if the test is not fit for purpose. If we produce a realistic, useful test then being prepared for it is a positive thing.

So who better to contribute possible questions than teachers? Imagine a Google form set up by a new exam board; let’s call it CCEB. Exemplar material, based on accepted good practice, shows how to lay out mathematical working. Questions are entered, with a markscheme. Dropdown boxes allow those entering the question to define marks available, and from key words describing the area(s) of science being tested. Active teachers, retired staff, academics – even students – all can contribute. The contributions are freely given on the basis that the results will be freely available as far as practical, probably via Creative Commons licensing.

When a certain threshold is reached – which if every science teacher in the UK supplies a single question, won’t take long – the submissions are sorted by category and checked by CCEB staff. Because they are being proofread rather than written, it will be quicker and easier. If you have some of the original contributors – determined by random allocation – paid for a day’s work, they can be pre-moderated as well. Mathematical questions can be kept in the same form but with different numbers substituted. A large pool of questions is now complete, ready for the exam, which can be balanced between topics. There will be enough questions, all produced at the same time, for several specimen papers to be made available. With a large enough pool, you could even make all the questions open source, like those for the theory element of the UK driving test.

It’s feasible that in the future, with enough questions available, every student could get a different but equivalent exam, as described in John Barnes’ book Orbital Resonance.

In the meantime, maybe we as science educators can get involved with setting better exams than the ones we complain about. The exam boards could ask for submissions in this way now. The cynic in me thinks that this would make it much harder for them to justify their existence. Maybe they would like to prove me wrong.

As part of a project I’m involved with at the moment (more accurately have been involved with, but haven’t been blogging about) I’ve been looking at ways to get students thinking more about how physics as a subject can affect their future lives. I know we all do loads about context, and how relevant it is, and how our lives would be different etc etc, but this was something different. After talking to some of our sixth formers I realised how few careers they could suggest that had something to do with physics.

My first idea was, rather indirectly, inspired by the ‘What Have The Romans Done For Us’ sketch from Monty Python, via the excellent parody at The Lay Scientist. I gave a group the image of a classroom and asked them to suggest all the ways in which people had used physics to make it work. With a few hints – okay, a lot of hints – they came up with loads of good ideas. 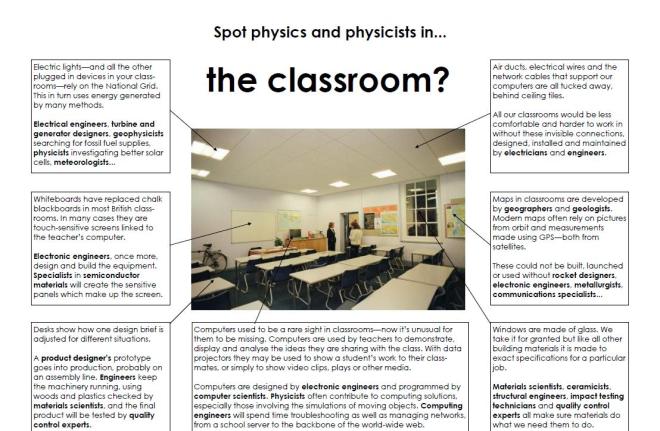 As you can see above (click the picture for the pdf) I ‘translated’ this into a poster, which is the stimulus for the next lesson, not necessarily with the same group).

The class get an example, and links to sites like the careers page at the Institute of Physics. They also get, in groups of four or five, a different situation – teenager’s bedroom, football match, doctors’ surgery and so on. They then have to produce an equivalent poster which shows the variety of jobs/careers/roles that involve physics to a greater or lesser extent.

I can’t easily upload the original Publisher versions (without messing with things like Dropbox and similar, anyway) so instead you’ll have to make do with the  printable: spot the physics, saved as a pdf. So you now have a choice:

This wasn’t the only approach I took. I’m working on a big list of science related careers (not working very hard because there must be something out there, right?) for the school VLE. I’m doing some work on combating ‘medicine is the only clinical career’ tunnel vision. And I’ve annotated a ‘highest paid professions’ list with a highlighter to show just how profitable physics can be.

PS These files are the first I’m tagging with the Creative Commons logo. This is just a way of formalising what I’ve posted about several times, that I’m perfectly happy for people to use and edit my content, but I’d rather they (a) didn’t make a profit and (b) credited me or the blog. More information on the specific licence I’ve chosen at Creative Commons: by-nc-sa.