It feels like a very long time since I blogged… and that’s because it has been a long time. The last year, almost exactly, has been pretty difficult. Over last Autumn and Winter I went through a major depressive episode, family illness, personal illness, accepted a new (exciting, but stressful) role at work… and then something really crappy happened.

I got a call at Cubs that our youngest, then aged 4, had been bitten by the neighbour’s dog. By the time I got home the ambulance crew were already there, making plans to head to Birmingham. When I caught up with them in A&E, he was dosed up on morphine and the consultant asked if I was squeamish before showing me the photos. It was only my previous clinical experience that let me hold it together.

Waiting while he was in surgery for hours the next day was hard, but during the afternoon he started to improve. Family and friends came to the rescue in dozens of ways, large and small. Both workplaces told us to forget everything except our child and each other. Nurses found us food and coffee and the Ronald McDonald House around the corner found us a room with a shower long after midnight.

A few days later and he was doing really well, wandering along the ward in between doses of painkillers and raiding the chocolate I’d brought in for his Mum. We took him home less than a week after he’d arrived, with boxes of fresh dressings and a balloon. Pretty much every member of staff went out of their way at some point, and we saw them doing the same thing for long shifts with every child on that ward, helping every tired and lonely parent. They were amazing, and we wanted to do something to say thank you. 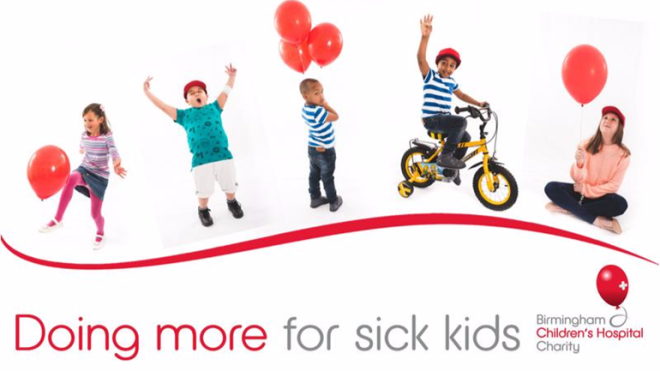 So this is why I’m writing; as those of you who follow me on twitter will know, I’ve been training for a running event. In just under three weeks I’ll be doing the Great Birmingham Run, a half-marathon, in aid of the Birmingham Children’s Hospital Charity. The kids are running various smaller events on the day, and probably laughing at my face as I struggle to the finish line. But what would really help is if some of you might like to sponsor us.

Our JustGiving page is here.

Thank you for reading, and to everyone who at various points in the last year have offered moral or practical support during tough times.

TL, DR: I’ve been blogging for years, and although it’s led to many great freelance opportunities I’ve never asked my readers to send cash my way. (Admittedly, I have linked to fundraising for Humanists UK, MIND and a few other charities.) This is, I hope, the last time I will be asking that if anything I’ve blogged, tweeted or otherwise shared has been useful, that you could say thank you with cash.

To increase the chances of this actually getting posted – instead of sitting in limbo like the (ahem) five drafts I’ve not completed – this will be briefer than my usual approach. But I figure bullet points are better than nothing.

I made it to the end of this year’s ASE conference. I had a great time, predictably because of the lovely people there. (Not the weather, obviously. I mean, it was Reading.) As ever, choosing sessions was nearly impossible with so many options and the plans for changed anyway. But this is what I did.

I met my good friend and fellow physicist @90_maz on the train on the way down. (She also blogs and you should check her out. And the blog.) Luggage dropped off, we headed for the exhibition to score some freebies. Post it notes seemed to be the popular one this year, although I’m quite pleased with my syringe pen. It doesn’t take much.

It’s probably a bit sad that on meeting Keith Gibbs I wanted to shake his hand and thank him for his help. His book was a gift on finishing my PGCE – from Marion, as it happens – and is well thumbed and annotated. His student-level website, SchoolPhysics, is one of the first I suggest to novice colleagues for their classes. I now have the revised and expanded edition of The Resourceful Physics Teacher, which I somehow bought without asking him to sign it. I’m proud of my self-restraint.

Finding the teachmeet was challenging. A plea to the conference organisers; can we please have a venue next year which is quieter, larger and not in the middle of the exhibition area? But it was filled with interesting ideas, plus my wittering, and I’m glad I joined in. I particularly liked the scannable answer sheets concept shared by Lucie, Quick Key, turning any device with a camera into a multiple choice OCR scanner. I talked about Checklists and Commentaries, including PRODME an approach to investigative thinking I’ve basically stolen from lots of people. Nothing revolutionary but I was pleased with how it went over.

The #alternativedinner – capably organized by @MrsDrSarah – was great. Rather than dinner jackets and long speeches there was much laughter, great food, interesting discussion and dueling with breadsticks. What more could you ask? It was a great example of how the informal accompaniments to a conference are as important as the official sessions and the signed-off CPD.
Friday
I had a little more time in the morning to check out the exhibition. Several things stood out when I had the chance to think about it.
I’m really glad I attended the session from the Perimeter Institute, a hands-on practical making measurements to calculate Planck’s Constant. I’ve used purpose-built apparatus before, similar to this from Phillip Harris, but the RI kit was much more direct – and significantly cheaper! We started the session by using a ‘black box’ starter, where we had to model the arrangement inside a piece of drainpipe to explain the movement of ropes. Building one of these is now on my jobs list.
I was worried that nobody would make it to my workshop, especially as I was a late addition to the programme. In the end about ten colleagues came, although I suspect the promise of @90_maz’s brownies had a lot to do with it. Interesting discussion and the participants seemed pleased – even inspired in one case! I’ve created a new blog site, aseconference2015.wordpress.com, with the hope that making it easy to get started will help those new  to blogging. My presentation is available on Google Drive and if you’d like to contribute a guest post – or for me to link to your own site – then email me or use the Google form.
After my session I attended two more in quick succession. Literacy in KS3 science could have done with more time, but then it is a big topic! An important reminder was that, just as with science methods, we need to ‘think out loud’ when demonstrating and modeling literacy skills. @Arakwai and I agreed that one big issue is the confusion when everyday words have a specific science meaning. I coined the acronym SAL – Science as an Additional Language – to summarize this.
This was followed by a look at the new KS3 science specification, led by Ed Walsh (aka @cornwallscied). It was interesting to analyze the differences between the old and new approaches to ‘thinking scientifically’. In particular, I wonder if the reduced emphasis on social implications of scientific ideas is a concern, as this is something which has in the past been shown to increase the interest and commitment of female students. A brief digression during the session was to discuss the issues students have with science being ‘only a theory’ – something that the RI addressed nicely with the video from @alomshaha and @jimalkhalili:
So in summary: a great day and a half with, as ever, many things to think about over the next little while. Some of them may even end up being blogged – if I can clear the backlog. Happy January, everyone…

Several posts should be arriving soon, including a summary of the recent #SciTeachJC, a quick guide to quick use of the 5/7Es when writing a lesson plan or a scheme of work, and ‘my fortnight on twitter’. This is a really quick one and is basically about me being selfish.

This site has been nominated for this year’s Education Blog Awards, in two categories: Teacher Blog and Influential Blog. You can see the list of nominated blogs here and in the spirit of fairness – and sharing – I strongly recommend you have a look at them. Recognising several names in these categories is rather startling, so the competition looks pretty fierce.

Firstly, I’d love to think that through this post you’ve found other useful, relevant and well-written blogs. That’s why I write and it’s why I have a list (often a bit out of date, it’s true) on the right. Secondly, it would be great if you vote. Obviously, if you think I deserve it, I’d like that vote to be for me. But if not, then please believe I’d rather you voted for a colleague (in the wider sense) than not vote at all. This is the kind of thing, apart from comments and shares, that makes us bloggers feel appreciated. Feedback and encouragement keeps us at our computers and off the streets. Trust me, you want that.

Thanks for your time.

It was probably from Alom Shaha that I first ‘heard’ the term virtual staffroom to encompass the ways in which Twitter and blogging can help teachers improve their professional practice. I’m not the only person who likes the concept, and there’s some excellent discussion elsewhere about the benefits it can offer. I’ve mentioned some of these ideas in passing before, and I’m not going to try to tell you that you must blog about teaching, or why Twitter will change your (professional) life. But I’ve gained enough from both that I thought it was worth highlighting a few things.

I started with a blog because I figured it was a shame that other people couldn’t learn from my mistakes – after all I’d made so many of them! Partly it was disappointment with the poor quality of the resources available through Memory4Teachers, which seemed a good idea blighted by poor execution. I’ve seen several benefits:

If you are going to blog, there’s loads of advice around. There are several teacher-specific aspects you may wish to consider.

As a final thought, I’d strongly recommend the Creative Education blog for lots of ideas, on blogging and other stuff. In particular, the article on Writing Blog Posts has lots of good, sensible advice. I don’t always follow it, but if not I usually regret it.

EDIT: @dannynic has a great blog post on starting a blog with more practical advice, well worth a look.