This isn’t a post about How Science Works, and how as teachers we need to ensure that all our little darlings always understand the relevance of the material to their lives. I mean, we should. But that’s not what this is about. This post grew out of a conversation I had with a colleague about how I try to keep myself organised. Some of it duplicates ideas to be found on the Organisation pages, as well as many other places online. 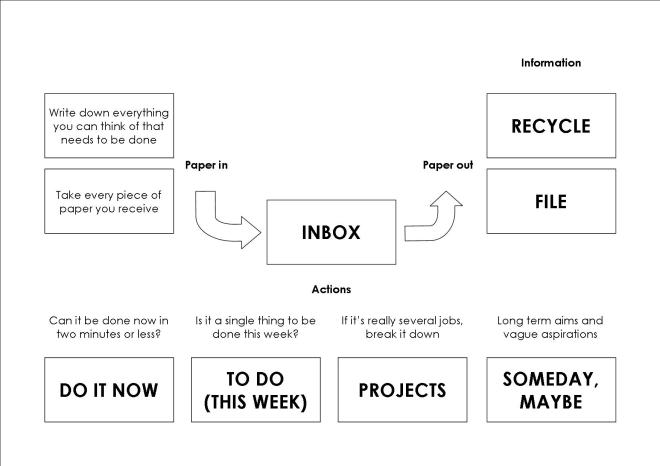 During the course of a day I tend to get half a rainforest’s worth of paper. Verbally, by email or in briefings I also get jobs to do, some of which are quick and easy while others are clearly going to be very time consuming. I’ve modified some of the ideas of David Allen (via summaries such as this one on Lifehacker) to suit the way I work and teach. Hopefully, the flowchart above makes sense and I’m not going to try and explain it in text – the whole point of a flow chart is that I shouldn’t have to! I will explain a little about the Inbox and the different kinds of Actions.

Absolutely everything should go through the Inbox. Jobs get forgotten when you’ve been told about them, but it doesn’t really register. His ideas about Getting Things Done revolve around the idea of ‘ubiquitious capture’, which is a fancy way of saying everything must be recorded in the same place. Like most, I struggle with this and effectively run two parallel Inboxes, one electronic and one on paper. I’ve found it works well to have an A4 plastic folder, attached to my planner, so I’ve got somewhere to put all the various bits of paper until I can deal with them. Anything not on paper either gets written down and stuffed in the folder, or written straight on my weekly To Do list. In the interests of work-life balance I have a separate notebook that I use for non-school stuff (like this blog), which has it’s own weekly lists. But anyway.

Allen is very specific about Actions but what it boils down to is that it must be a single action (one job) that doesn’t require much in the way of thinking. There will be a concrete result and ideally they should be phrased as something which has been completed (e.g. ‘Year 7 book numbers copied to database’). I tend to write them as active verbs (e.g. ‘copy Year 7 book numbers to database’) but I agree with his reasoning that being as specific as possible makes it easier to get them done – they then require time, but not judgement. The idea is that ambiguity (e.g. ‘book numbers’) leads to confusion and/or procrastination.

If it turns out the job needs more than one Action he then calls it a Project. This will have a series of simpler jobs, each of which will need to be added to the To Do list separately. Completing them individually still gets the whole thing done but makes it much more achievable. Keeping track of ongoing progress is important because otherwise I’ve found that Projects end up drifting. Think about students doing coursework; if they don’t have a series of interim targets then they won’t have anything worth handing in the day before the deadline.

At opposite ends of the spectrum are the items which can be done in a couple of minutes (i.e. less time than writing them on the list would take) and things which are ideas, rather than concrete objectives. These last should be reviewed regularly (I go through mine each term, for example) but not on a daily or weekly basis.

The end result is that new items get added to my To Do list each day. To help keep myself productive I use another of his ideas, which is effectively the same as tags in Twitter. Most items will have a key word next to them, one of several specific contexts that tell me where I will need to be to get them done. Instead of jumping from one place to another, I can save them up until I’ve got enough work to fill the time available. These will be different for everyone, but for what it’s worth:

To be complete, I’ll add that the notebook I try to use to keep my non-teaching life in order (a vain hope – I have two kids) has a couple of extra ones:

Once a week (and more often if I get the chance) I clear out my Inbox, add a bunch of items to my To Do list and make sure I’m not getting behind. I check my Calender for the week ahead and move one job from each Project on to my To Do list.

Or that’s the theory, anyway…

printable: Actions as a pdf